skip to main | skip to sidebar

Narama
We work as ecotourism guides (as well as biologist and boat captain) often on the BC Coast, but also as far ranging as the Arctic and Antarctic. We have an insatiable curiousity for the planet; all its hidden gems and what makes them tick. That and our love of sailing is what inspired us to sail around the Pacific in Narama, our tough and pretty little sailboat.

Richard Kirby, a plankton scientist at , wrote to us recently to about the new Secchi Disk project.  It is a really simple way of measuring plankton abundance with a circular home made disc and graduated line or measuring tape.  It is all about citizen science and we'd encourage every-one to take a look at the web site and help out. After all plankton provide us with about half the oxygen we breath. 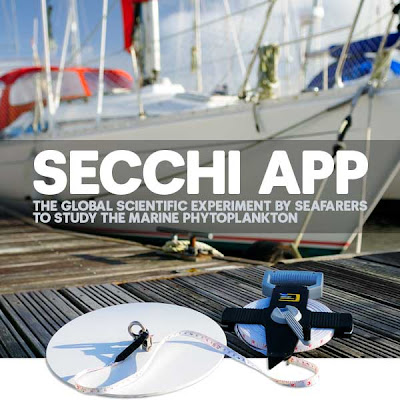 If you have enjoyed following Narama’s Voyage on our blog, we have put together a book!


Have a look at the Blurb website where you can look at the book and order one if you like.

This book was not professionally editted, but we did have fun putting it together.  Enjoy!

After the wind swung and the seas built we were effectively booted out of .  It was against our will, as we loved it there and I could have happily spent weeks counting and photographing the nesting birds.  Then the wind stayed in the SSW so we could not stop at Chesterfield Reef which was likely to be another amazing wildlife spot.  So we had a week at sea with perfect sailing breezes, but we couldn’t set full sail and carry on because that would have meant making landfall in Australia on a weekend and the officials make it prohibitively expensive when that happens.  So we continued to shorten sail and leisurely make our way west.  Our autopilot motor finally died shortly after the wind died, so we had to tie the tiller and hand steer more than usual.  We could have arrived two days earlier than we did, but managed to slow ourselves down enough to arrive at midnight on a Sunday.


Our arrival into Australian waters was heralded by a wonderful show.  Lots of breaching, pectoral slapping and breeding Humpback Whales!


It is hard to believe that this amazing adventure has come to an end, for now anyways.  We have mixed emotions as we start preparing to leave Narama for a while.  What a magnificent journey it has been!

A sandy island 0.6nm long in New Caledonia’s most northern reef system lies about 100nm NW of the mainland. Its exposed grassy ridge about 20ft above sea level is home to thousands of birds.  “What sea sickness…” says Heidi as a booby landed on our boom just after dropping anchor. We’d had a super fast 2 day 300nm passage to get here and had our fingers crossed the wind would swing further to the east as even the SSE wind had chop wrapping up the open lagoon. Still it was better than at sea. We found the GPS (WGS 84) longitude agreed with the French Chart 5978 but the GPS latitude placed us about 0.35nm north of our actual position in relation to the island.  Some nice big areas of sand to anchor in just near the island’s centre. We had a fly over by a French patrol plane who politely asked over VHF our past and future ports of call etc, so we were glad we’d put the courtesy flag up and had emailed customs.


The wind did swing overnight, so we went ashore and walked the beach around the island amid the thousands of Brown Noddy’s and Brown Boobies. Both of these were in quite a range of breeding stages, but the less numerous Masked Boobies were courting and incubating.  Hermit crabs were doing a good service as clean up crews for the large numbers of dead chicks and when they weren’t eating they hid under whatever minimal cover there was from the debris washed ashore be it coral blocks, wood or coconut shells. The eastern shore was covered in debris with the reef extending beyond. The western side is more or less exposed to open water.  The only Red-footed Booby we saw was the one that roosted on our spreaders doing injustice to our decks but some how missing the French flag.


Turtles also breed here and a plaque asked for help in with a breeding survey. So we diligently dragged a stick around the island drawing a line that we are meant to inspect for turtle tracks the following morning. Unfortunately the wind returned to the south and we were unable to return to our last bit of paradise. By lunch time the 2-3-foot chop and 20kns finally dragged the anchor and we decided it best to put to sea after one re-anchoring attempt.

Lamap on seemed to be Kava Central, with 14 kava bars (nakamals) for its population of only a few hundred.  Our first taste of this peppery, muddy brew was in at a feast we attended.  This really was a thick sludge and I’m glad it was only a small taste and not the usual full bowl.  Possibly it was made from a powder which made it thick.  The usual way to make it is much more interesting.  It takes a few years to grow a Kava plant to produce several kilos of kava root.  The root sells for 250 Vatu/Kg and Vanuatu Kava is the strongest in the South Pacific (or so we were told).  We couldn’t work out the exact ratio but it seems that you need a few kilos of root to make a bucket of kava to drink.  They diced the root into small cubes, give this a rinse and then put it through a mince meat grinder (or on one island they pounded it in a large improvised mortar and pestle). Traditionally this stage was acheived by young boys chewing the root, but times have changed.  Water is then added to the mash which is wrung out through a hessian sack a bit at a time.  The whole grinding and wringing process is then  repeated.  Finally the silty muddy product is poured through a fine cloth.  A ladies slip seemed to be the correct weave.   This sieving out the sediment was done many times during the production and I’m sure it was the reason that Lamap kava was more palatable.  Kava bars in Lamap come in all shapes and sizes, but the norm was a thatched roof with seating underneath.  I think Fidel’s “Sunset Kava Bar” had the most character of all and he was proud to say that he had many regulars.

Copra and Gardens in Vanuatu

During our extended stay in Port Sandwich due to bad weather, we learnt a lot more about the production of copra.  It seems like copra is a staple in the cash economy of the islands.  Not easy cash, but always there to provide income if you’re prepared to put in the hours.  In places where money can be made more easily from tourists, the labour to produce copra in return for about 30 000 vatu (about $350) a tonne is often deemed not worth while.


First you have to collect the coconuts from beneath the tress laden with them.  On a short walk through one plantation three coconuts dropped off near me in a matter of 10 minutes, so collecting has its hazards.  One family-owned plantation had the perfect topography for funneling the coconuts downhill towards the house, which means less work!  Once collected the coconuts are then split in half by a knife or axe and the hard meat removed.  In Tahiti it was dry enough for the meat to be sun dried, but here in it needs to be smoked for up to seven days, when it loses about half its volume and finally it is put into large hesh sacks that are weighed and bought by agents in the village.  When enough is collected, a ship is then called.  In a few places they have a wharf, but mostly it is loaded by a landing barge pushed up on a beach or taken by lighter to the coastal cargo vessels.  Estimates by those we asked:  it takes about 50 coconuts to fill a sack and 10-15 sacks for a tonne.  A large majority of the copra goes to Post Vila to be made into biofuel which is then used for generating electricity in an effort to be less reliant on imported fuel.  The remainder goes to a plant in Santo (Luganville) to be refined for cosmetic uses.

With the increased use of cell phones the demand for cash is on the increase.  Other wise if you ask most people what they do the reply is, “I go to my garden.”  Every family here has a garden plot (or several) and a great variety of fruit and vegetables are grown.  The gardens are usually a good walk from the village or across a body of water to segregate from the cows and pigs that wander freely and would love to raid a garden.  From a young age the ni-Van people carry large knives so that they are able to tend their gardens or drink from a coconut at will (no carrying water bottles).  Not once did we see any one coming or going from their garden with more than a knife in their hands and their bundles of produce on return.  Food is often sent on the coastal boats to family in Port Vila who do not have a garden and an easy, cheep supply of good food.  We believe that the soil in Port Sandwich must be very fertile as we were constantly offered a range of fruit and vegetables.  We did our best to always offer something in return but it wasn’t expected.
Posted by Narama at 6:02 PM

This is a sailing and travelling blog. 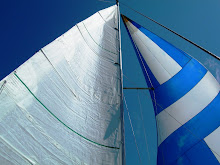 We're sailing Narama around the Pacific and looking for wildlife on the way!